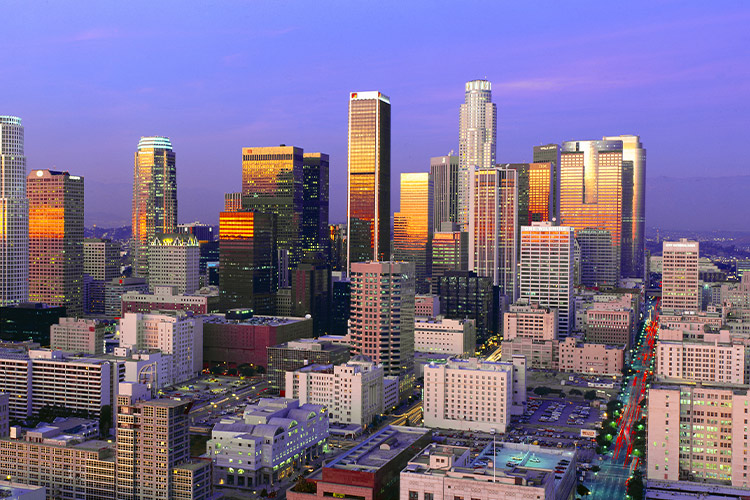 Los Angeles or LA, as it is better known, is a sprawling city in Southern California. Home to around 4 million people, of which roughly half are Hispanic or Latino. Spanish is almost as widely spoken as English here. Of course, LA is probably best known for its Hollywood film industry and no visit would be complete without a trip to Hollywood, home to Universal Studios. Here you can see an actual working movie studio, along with a theme park, where you can enjoy thrilling rides and family-friendly shows and attractions. Then, there’s Disneyland Park, which was originally designed by Walt Disney himself or catch a concert at the legendary Hollywood Bowl.

Other attractions in LA include, the TCL Chinese Theatre, which hosts movie premiers and the historic Hollywood Walk of Fame, where you can see the stars names on the sidewalk. Walk down Rodeo Drive, in Beverly Hills, with its upmarket shopping and fashions or visit the Griffith Observatory, with its high-tech planetarium, public telescopes and city views. There’s also the iconic Sunset Boulevard, known for its vibrant nightlife or see some of the most way-out people you’ll ever meet, on the boardwalk at Venice Beach. 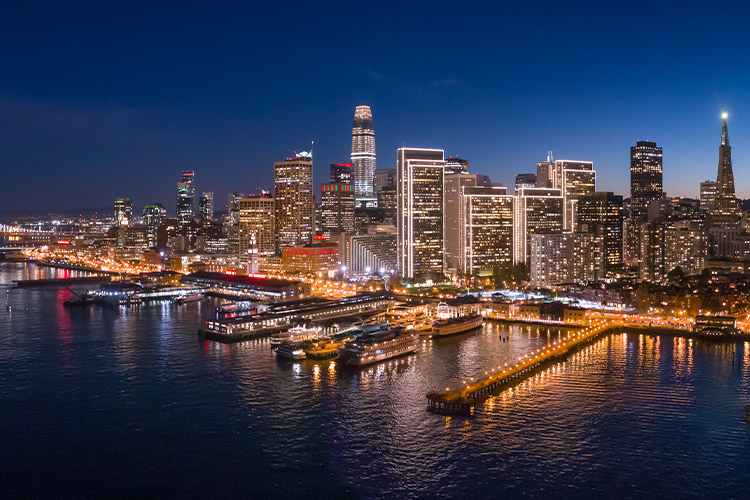 Tony Bennett might not be the only person who left his heart in San Francisco. It’s an easy place to love. Here, little cable cars, really do climb halfway to the stars and you can ride on them too. Make sure you get down to Fisherman’s Wharf and try a clam chowder in sourdough bread – you won’t be disappointed. While you’re there, catch the ferry across to the former prison on Alcatraz Island and see the last home of the notorious gangster, Al Capone and the BirdMan of Alcatraz.

See the Golden Gate Bridge and visit the famous Union Square, with its upmarket shopping area and vibrant nightlife. Go people-watching in the Haight-Ashbury area, birthplace of the 1960s hippie movement, which still draws a lively, diverse crowd. There are so many different places to visit in San Francisco, you’ll wish you had more time to spend here. Las Vegas or Vegas, as it is known more commonly, was created in the middle of a desert in the state of Nevada. Originally built on gambling, vice and other forms of entertainment for the local railway workers and ranchers, it quickly developed into what is now known as the Entertainment Capital of the World. It’s also the Gambling Capital of the World, with its numerous famous casinos like Caesars Palace, Circus Circus and the MGM Grand.

Today, Vegas, draws 40 million visitors a year from all over the USA and the world, showing its wide-spread appeal. As well as gambling, the casinos are famous for their shows and here you can see artists like, Celine Dion, Cirque du Soleil and Australia’s own Human Nature.

Apart from the shows and the glitter of the casinos, there are plenty of other things to see and do in and around Vegas. The casinos themselves provide plenty of sight-seeing opportunities. For example, take a gondola ride at the Venetian Hotel and Casino or hop aboard a roller coaster at New York_New York Hotel or visit the Eiffel Tower at Paris Las Vegas.

Or leave the bright lights behind and take a helicopter ride and soar above the Hoover Dam and the Grand Canyon and see Lake Mead, the largest man-made dam in the USA. Or take a hike through Red Rock Canyon, just 17 miles out of town or go trail bike riding in the desert.  And, if you want to do something that’s really different, try the Vegas Machine Gun Experience. Here you can blast away at life-size targets with an M4, an AK-47 or the historic Thompson submachine gun!

Whatever your desire or fantasy, Las Vegas is sure to not disappoint.

Due to its sub-tropical climate and laid-back lifestyle, Miami is one of America’s favourite holiday and retirement destinations. Miami offers not only some of the most beautiful world-renowned beaches, it’s also famous for its Art Deco architecture, art and culture, as well as a legendary nightlife scene. It’s a great place to just sit around sun-bathing and drinking cocktails but there’s also a lot to see and do here.

For instance, take a drive along Ocean Drive in the South Beach area. Here you will find the world-famous iconic Clevelander Hotel, an adult-only hotel with two rooftop terraces. Or take in a recital at the New World Centre Concert Hall, the home of the New World Symphony Orchestra. The Miami Seaquarium offers a variety of daily marine animal shows including dolphins, seals and orcas. Jungle Island, is home to nearly 3,000 animal, bird and plant species, including a petting zoo and adventure trails. Coral Castle, is an outdoor garden, featuring sculptures hand-carved by one man from more than 1,000 tons of coral. Or visit Wynwood Walls, a unique outdoor location featuring huge, colourful street murals by artists from around the world.

What can you say about New York? The answer is – everything! Known the world over as, the city that never sleeps, New York is literally switched on 24 hours a day.

The largest city in America, New York is home to over 8 million people. New York City (known as NYC) is divided into five boroughs – Brooklyn, Queens, Staten Island, the Bronx and Manhattan. Manhattan, is where you will find most of the city’s top attractions, like the Empire State Building, the Chrysler Building and Times Square. Times Square, is one of the busiest places in NYC, known for its many Broadway theatres, cinemas and electronic billboards. Make sure you take in at least one Broadway show while you are here. And, no trip to NYC would be complete without a visit to Central Park, where you can see lots of landmark sights, including the Central Park Zoo. Take a stroll across the Brooklyn Bridge, completed in 1883, which connects Brooklyn with Manhattan. Take a ferry from Lower Manhattan to the Statue of Liberty on Liberty Island.

Apart from Manhattan, there are lots of other things to see and do in the other boroughs of NY, like:

The Bronx: Here you can see the Yankee Stadium and the Bronx Museum. Queens: Lots of ethnic neighbourhoods, like Little Italy, with its authentic Italian restaurants and bars. Or visit landmark buildings like Grand Central Station and St Patrick’s Cathedral.

On the cultural side, in NYC, you will some of the world’s most famous art museums, like The Met. Then, there’s the Guggenheim and the American Museum of Natural History.

Whether you’re riding the subway, visiting The Empire State Building or eating a hot dog or a pretzel in Times Square, you will find New York is everything you expected and more. 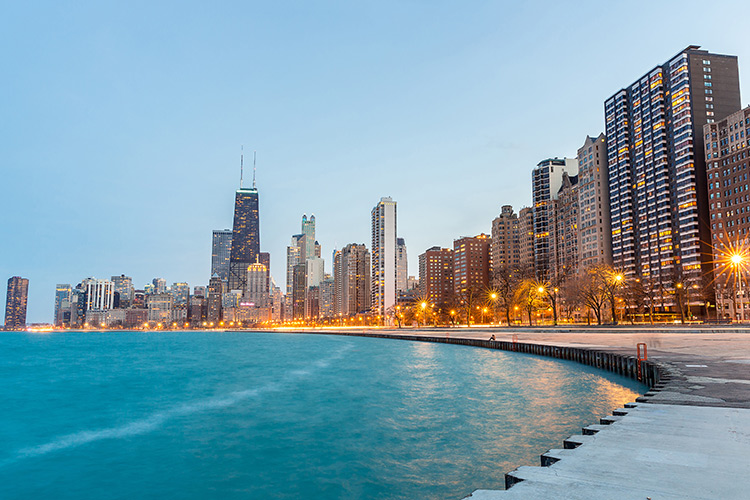 Chicago offers everything you’d expect from a major city, including world-class museums, a vibrant shopping districts and some great nightlife venues. Things to do here include Millennium Park, a 24-acre green space with its reflective “Bean” sculpture and outdoor theatre. Wills Tower, an iconic 110-story skyscraper, featuring panoramic city views of Chicago from its 103rd floor Skydeck. Navy Pier, a former Navy training centre, now featuring carnival rides, restaurants, shops and firework displays.  Shed Aquarium, the largest indoor aquarium in the world. It holds five million US gallons of water and has views of Lake Michigan. Adler Planetarium dedicated to the study of astronomy and astrophysics with high-tech sky shows to entertain star-gazers.